More extended studies on UFO often require as much as possible collecting a maximum of information when a phenomenon occurs. A camera or camcorder lens equipped with a diffraction grating will give a spectrum. An antenna associated with a detection station will give a radar signature. But another type of information may be worth collecting: sound.

Many testimonies have reported hissing, humming or hollow sounds as well as engines sound or even detonations.

Some of them have been analyzed by the past. Thanks to a real-life condition test, we are going to see what kind of data can be gathered from sound signals.

A quick recall: the evening of January 8th, 1981, while Roberto Nicolai is working in his garden, his attention is drawn by a light humming sound. As he turns around he then discovers a small ovoid object slowly approaching the ground. This last eventually lands few meters from him before leaving after few minutes.
This event became quite famous in the UFO sphere after analysis made on plants that were collected on the ground. Biochemical analysis made by Pr Bounias had led to think that a quite uncommon major event actually occurred.

Three years later, for one of the TV show « Temps X » presented by the Bogdanoff twins, a new on-site investigation was done.
The reconstruction involved a rough mock-up of the observed object. To go further in this work, a reporter gave a series of sound effects recordings to listen to the witness. The goal was to determine what could be the closest matching sound heard that day. Roberto Nicolaï eventually identified a high pitch sound matching his recollections.
However, it is rather difficult to trust human memory and perception.

Another testimony is the Nord-sur-Erdre one, in Brittany (France). During the night between September 8th and 9th 1987, a young boy asserted to have been awakened by a strange noise. Opening the window shutters, he could then observe a luminous oval object few meters from him. He reported to have recorded what he could hear on a “TWIST” branded tape recorder.

This recording will be submitted to experts the year after, for the benefit of the GEPAN (Groupe d’Etude des Phénomènes Aérospatiaux Non-identifiés). After collecting various elements, an exam of the cassette tape and some lab analysis, the conclusion came in favor of a fake.

However, several people doubted on the official conclusion, as several independent parallel investigations were made on copies of the original recording. Expert reports and minutes of these investigations are freely available on the internet. Everyone can make up his own opinion.
Getting more from this case would imply to have a good knowledge of technologies used in these days to be able to detect possible technical mistakes or discrepancies. Also note that a copy is never 100% identical to original.

Let’s also mention a quite recent third case. In June 2008 in Tournefeuille, one of the Toulouse outskirts, a luminous object has been observed. The event has been reported in the local newspapers, especially in La Dépêche. 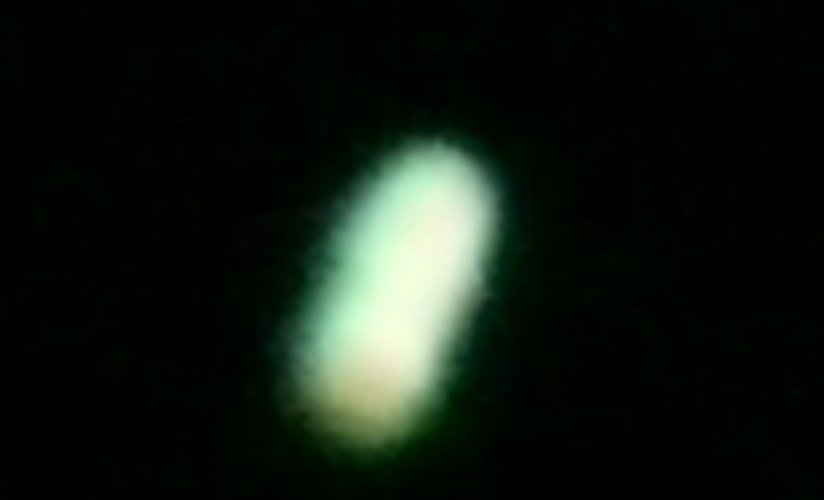 Abstract from the testimony :

«It was hot that Sunday to Monday night and I could not sleep. I got to my bedroom window, watching the sky and waiting for my sleep to come back. But it never came back, for good reason! After half an hour I heard an intense humming noise and saw an object coming down from the sky at high speed. From green, it turned to purple. It came from Léguevin direction. My heart was pounding… »

No spectrum or sound recordings despite the availability of microphones in many of our day-to-day available devices (mobiles, cameras, etc).

What kind of data could we get ?

After reading these testimonials several questions came to us :

Questions to which a simple testimony cannot give a firm answer. Only a sound spectral analysis or a sonogram could help to sharp answer.

There is no way to anticipate the kind of phenomenon we could face. However, let’s make a hypothesis: Let’s imagine that the phenomenon is surrounded by plasma. The emission of acoustic waves could be the result of plasma pulsing in the air. Analysis of sound recordings could be a way to indirectly get the main frequency at which the plasma pulses. 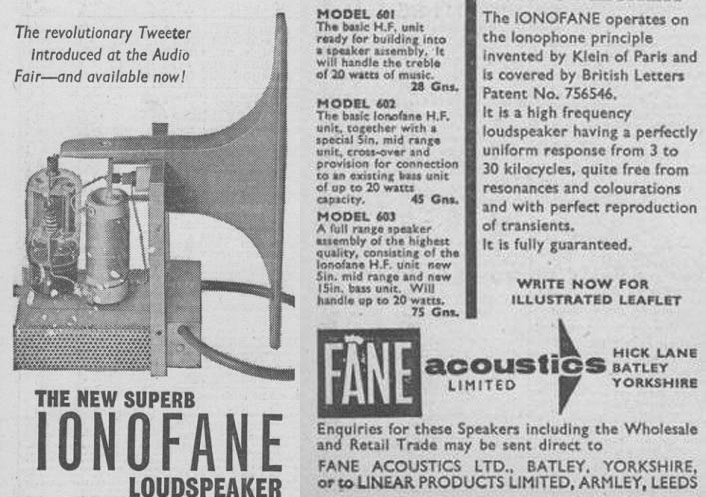 The principle has been known for more than half a century now. It consists in creating sonic waves from air ionization :

«In a quartz cell, a high frequency wave is generated between two electrodes in order to create an air ionization modulated by the low frequency signal to reproduce. An ionized air bubble is formed, which volume variations generate an acoustic pressure. As the displacement is very weak, a diaphragm or cone must be added to the system in order to adapt the system to ambient air. This diaphragm usually has an exponential response».

An experience has been led in 2008 with a plane in landing phase. The goal of this test was to determine whether objects speed could be estimated using non-professional sound capture devices, as found in many everyday life devices (mp3 readers, cameras in video mode…). The signal analysis itself is easily done from free downloadable software.

Computing the speed by Doppler Effect requires knowing both the original frequency emitted by the airplane and the angle of the sound waves between the observer and the airplane at every time step.

A 3D simulation of the plane trajectory gives the sound waves propagation angles : 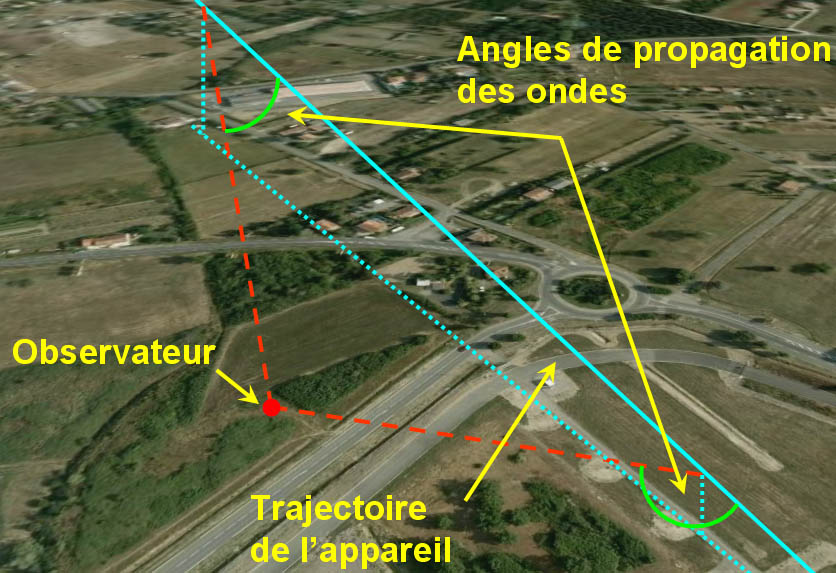 Frequencies as emitted and perceived are visible on a sonogram : 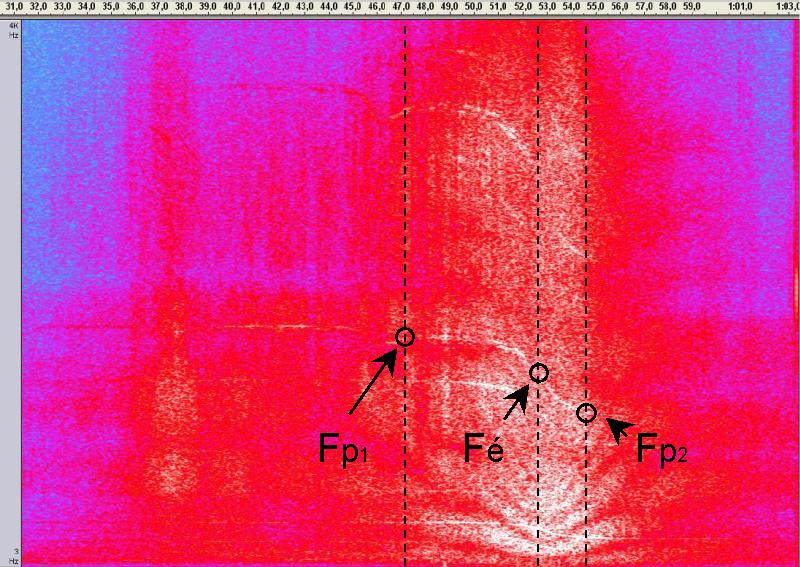 The typical curve of the Doppler Effect represented by the frequency variations over time is accurate enough to get meaningful values.

It is worth collecting and analyzing this kind of data. First, to discard any ambiguities in case of natural phenomenon (meteors, electrophonic fireballs…) or artificial but known vehicles (aircrafts, helicopters…) and second, to collect some characteristic values of the sound source whenever no explanation can be found.

Besides, official institutions have also addressed this study field, but for a quite different use.
A report from François Louange, dating back to 1982 and titled “Studies on Rare Aerospace Phenomena Detection”, available from the GEIPAN website, mentions some acoustic devices used in lightning detection situation in order to protect some sensitive sites. Microphone use is indicated for listening to typical sounds of meteorites and measuring the keraunic level (number of time thunder is heard in a year).

If an object has a very erratic movement, preventing any modelling from simple video footages or testimonies, it will be difficult to get the frequencies emitted by the object that are mandatory for speed calculation. Hard for a human being but not for a detection station.

Detection stations like the UFOCATCH can actually precisely triangulate positions of an object in real time, compute speed in every point, including accelerations. Such data along with sound recordings make it possible to find the emitted frequencies. More than that, frequency variation over time can also be determined. 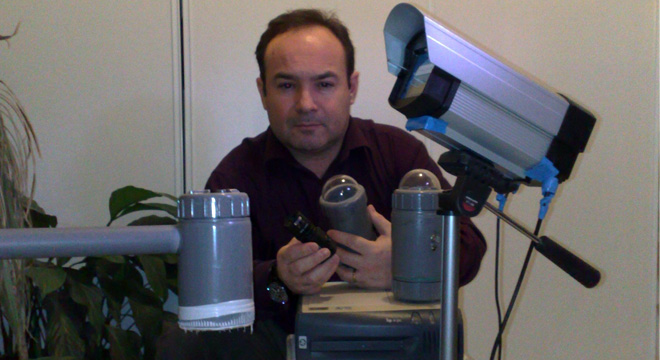 You can find online a series of videos captured during two acquisition campaigns, in April and August 2009. 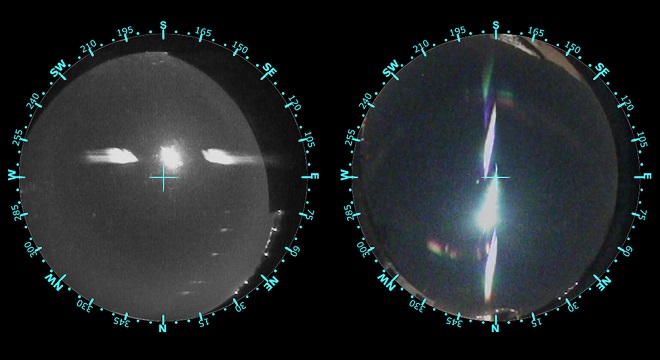 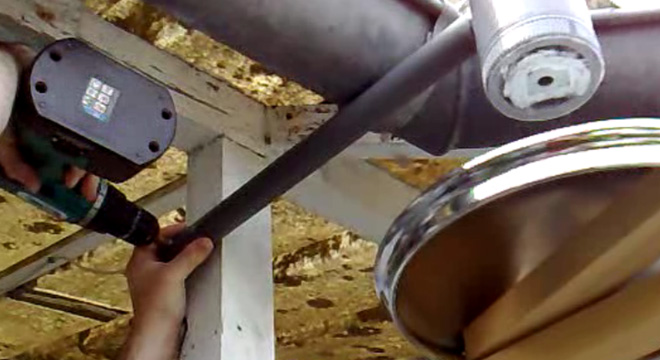