Here you can find our MHD research program.

Each line of this table correspond a page explaining the work in progress in a particular domain, or a scientific paper in the case where our works have been presented in an international congress.

Stable spiral distribution of the current on MHD Aérodyne

Here are some pictures of the recent MHD experiments performed at our Lambda Laboratory. These pictures show perfectly the Spiral Currents disc-shaped Aerodynes. The establishment of a stable spiral distribution of the current is obtained by an original method, based on the concept of disc-shaped MHD aerodynes introduced by Jean-Pierre PETIT in 1975, in 2 papers released in the “Comptes Rendus de l’Académie des Sciences de Paris”.

This work will be presented in a Conference of Physics of Plasmas, that will take place in Warsaw (Poland), in fall of 2013. It is the first time, but certainly not the last, that the words “MHD Aérodyne” are registered in the title of a scientific paper in an international scientific symposium.

The paper presented by JP Petit during the 25th Symposium on Plasma Physics and Technology in Prague (Czech Republic) has been published in the peer-reviewed scientific journal Acta Polytechnica. This paper is available on-line on the website of the Review (Volume 53(2), pages 219-222).

The concept of disc-shaped MHD aerodynes has been introduced by Jean-Pierre PETIT in 1975, in 2 papers released in the “Comptes Rendus de l’Académie des Sciences de Paris”. Bringing out first the Velhikov instability and then cancelling it are two major steps to the experimentation and achievement of such aerodynes.
A state of the art as well as a status on our works progress are given in the following dedicated page : Spiral Currents disc-shaped Aerodynes

This is an interview with Jean-Pierre Petit, recorded during a informal presentation of our work, external to official symposium at Prague . The french version will be available soon. This is the full version (51′).
You can also see this video in three parts

25th Symposium on Plasma Physics and Technology à Prague.
This event set up by the Czech Technical University (Faculty of Electrical Engineering, Department of Physics) and theInstitute of Plasma Physics AS CR, v.v.i., was held from June 18th to 21st 2012. We were invited to report on our MHD research works led at the Lambda Laboratory and exchange with searchers from other foreign laboratories.
Read the summary of this event.

Here are two new pictures taken from UFO Science last book, sold for the sole benefit of the association.

On the left, upper magnets coming down start the confinement effect. On the right, the discharge is fully confined.

Jean-Pierre Petit and Jean-Christophe Doré were in South Korea in Jeju Island, to present the first results of experiments of low-density MHD system to the International Symposium MDH EAPPC 2010 / BEAMS 2010, from October 10 to 14, 2010. Read the summary of this event.

Video of the presentation by Jean-Pierre Petit, on Wednesday, October 13th :

Here are the selected color pictures for the communication that will be presented during the Pulsed Power Conference in Korea (EAPPC-BEAMS 2010).

The electric conductivity can be then expressed thanks to a matrix. It can also be said that there are in fact two conductivities: one parallel, the other one transversal. For a given pressure, according to the magnetic field value which determines the Hall parameter one, we have two opposite situations :

If we want to get high Hall parameter values with modest means (permanent magnets), we have a solution : Work under low pressure. Here under our test bench. 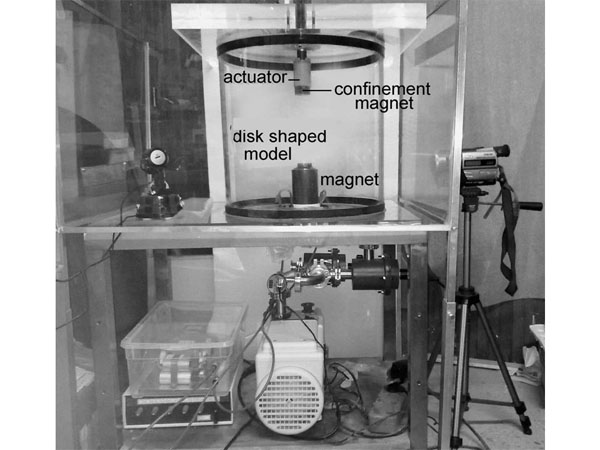 Some few pictures obtained with the test bench

Since May 2010, the low pressure MHD test bench was being assembled. It is now fully operational.

Many parts have been especially made for this test bench, like the machined vacuum valve and the actioner, electrically isolated that have been designed, machined and mounted. A remotely controlled motorization has been added to keep a security distance between the bench and the experimenter. Small parts like stoppers and aerodyne mockups are on site, with a milling machine for mockups makers.

The bell jar glass is 40 cm in diameter. The first one we received alarmingly started to deform during first use. The manufacturer took it back at his expense and we have had to quickly order a new one. For security, three glass panels have been added for experimenter’s safety and to prevent any risks of flying pieces of material in case of implosion of the bell jar glass. The metallic tray has been replaced by a wooden made one to avoid electrocution risks.

A series of experiments is being prepared, especially hydraulic oriented ones, but we need some specific tools (see Jean-Pierre Petit requests on his website).

The paper presented at the international MHD conference in Bremen in October 2009 by Jean-Pierre Petit, is available on our website :

Jean-Pierre Petit and Julien Geffray were in 16th AIAA/DLR/DGLR International Space Planes and Hypersonic Systems and Technologies Conference, Bremen (Germany), to present the paper named “MHD hypersonic flow control for aerospace applications”. This event was set up by the American Institute for Aeronautics and Astronautics (AIAA).

The three papers presented at the international MHD conference in Vilnius in September 2008 by Jean-Pierre Petit, and all three accepted by the peers, were published in the scientific journal Acta Physica Polonica A (tome 115, n° 5, june 2009). They are available on the site of the journal :