Coupling a diffraction grating cap to a mobile phone running a geolocalized imaging software in augmented reality is the perfect tool to capture usable pictures of Unidentified Aerial Phenomena.

We have tested with a great interest a software for IPhone and IPad called THEODOLITE.

As spectrum pictures acquisition is already a well mastered technique, we focused our attention to functionnalities brought by such a software, and more especially geolocation and triangulation data.

Three versions of the software are available: FREE, BASIC, PRO (or HD).
Our attention was set more particularly on the PRO version, as related functionnalities seem to perfectly fulfill our needs :

– Triangulation, distance, altitude of the target

From two locations selected for data recording, several kinds of computations and results can be obtained, like distance between two locations, but also height of an object or position of an object from two sufficiently distant locations.

Geolocation data can be exported by email, but also by the clipboard.

In a first phase, we considered 2 randomly chosen locations A and B and targeted a remote object (the Moon). For each location, we recorded coordinates and indicated whether we were on location A or B.

The screen is very readable : 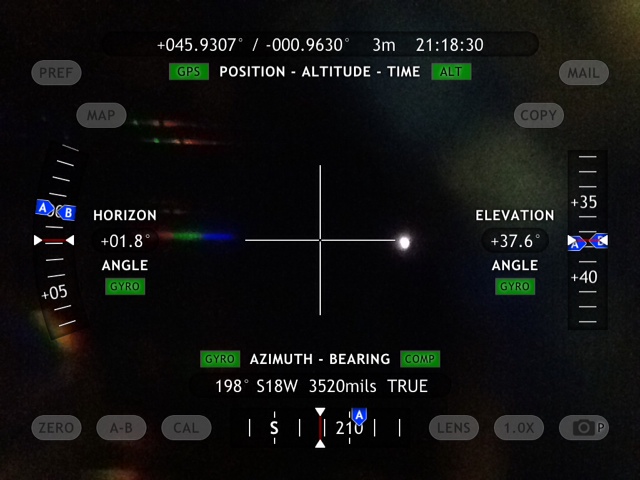 From these records, we get the following map : 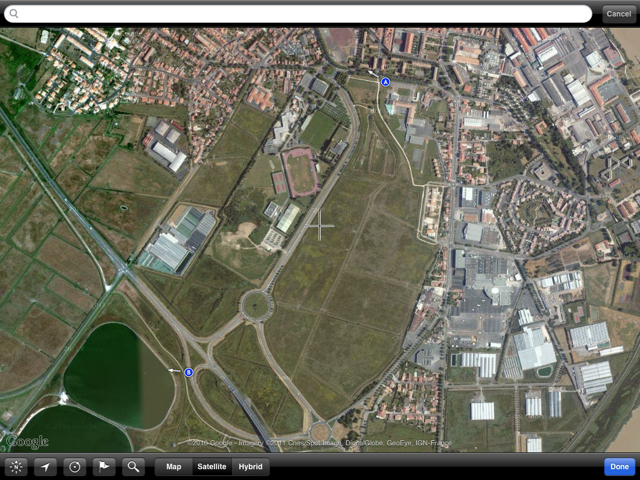 For each location, we can then take a picture displaying geolocation data :
A diffraction grating cap is fixed on the camera lens. 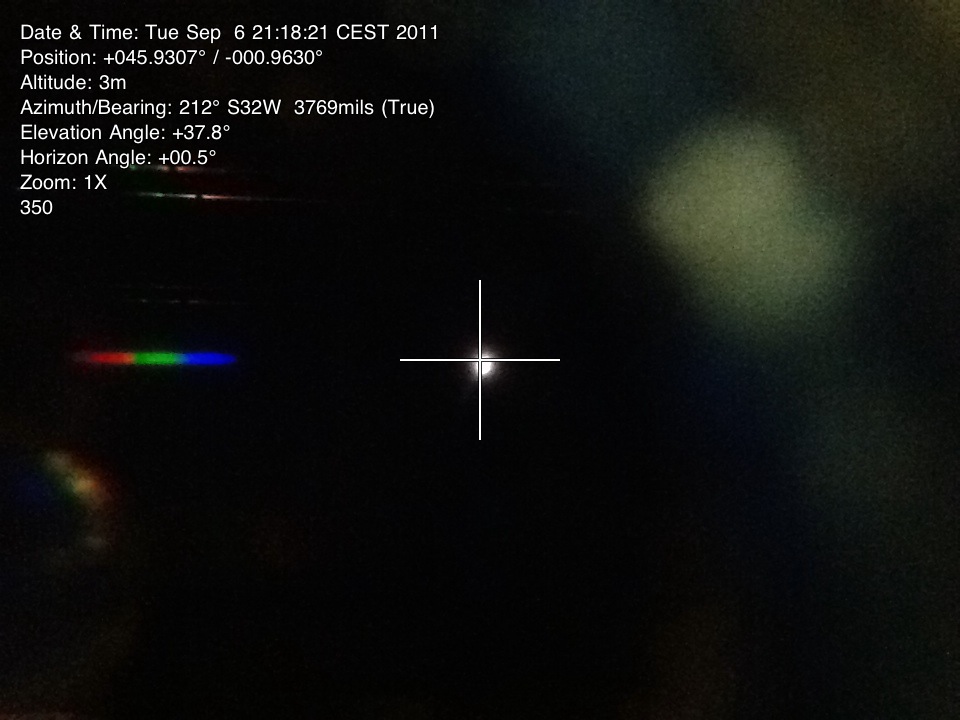 Move to location A and touch the A icon. Repeat operation for B location.
Theodolite will compute the distance between the two locations from GPS coordinates. Beware however to precision of resulting data.

The best precision is 10 metres, the worst 65 metres.

Locations can be visualized on a map.

Distance to an object.

This is the reverse function, by providing the approximate height of the object, the distance is calculated.

It is possible to get the distance to an object by targeting the base of this object and then selecting for B your own eyes coordinates. Just indicate your size to the software.

Triangulation, geolocation of an object.

Move to location A, and while targeting the object, touch the A icon. Then move to B location and repeat the process. As the software uses longitude, latitude and azimuth to compute the position of the object, the computed position is dependant on precision of these parameters. Always check GPS precision (10 meters at best, 65m at worst). The more important the distance between A and B, the better the precision of location C. Locations A, B and C can be visualized on a map.

There are some cases for which triangulation is not possible, when A & B are the same, if target lines are parallel or ABC are not forming a triangle.

Button “PREF” on top-left of the screen.

With the FREE version, allows compass and units setting, and camera options setting. In addition with the PRO & HD version, angular units can be selected (degres, percentage of degree and GPS coordinates format).

This button resets all orientation and angle values to 0.This allows the definition of an origin to work with relative angles. Hit this button again to come back to previous mode. The “ZERO” button is not active when the triangulation calculation is running.

Allows recalibration. Align the screen so as to target the horizon – or any location height taken as reference and hit the button.

Rangefinder function
.
This functionnality allows quick estimations of distance between objects and landscape,

to come…test of triangulation function