In this page, you will find the first real life condition spectral shots of a light spot aloft. Those pictures and videos have been taken with digital cameras, mobile phones and automatic detection stations.
NB : If you have just landed on this page without knowing what is a diffraction grating and what it is used for, first read this dedicated page.

Aside from the now classical grating cap to screw on the camera lens, JC Doré also imagined a very low cost and small self-adhesive grating “patch” for the low size lens of mobile phones. Everyone does not necessarily have a digital camera or even less wanders around with a camera all the time, but who does not have a mobile phone with a built in camera today ?

This « mini-cap » is indeed the ideal mean to widely spread diffraction gratings to the public. Under high volume production the price is incredibly low. As an advertising medium it could be entirely funded by a logo printed on the removable cover and then proposed as goodies available for example in dispensers similar to candy gift baskets and well placed on mobile operators counters. Indeed, only a massive spreading of diffraction caps to the public will give a chance to get an exploitable UFO spectrum. This is all a matter of statistics. To date, around 2000 diffraction gratings – as slide frames to mount on camera lenses – have been delivered by UFO-Science. More than ten times this figure would be needed. This is a call to industrial companies that could be interested by this product as a good support for trade promotion.

JC Doré also largely involved himself in the design and development of automatic detection stations, equipped with diffraction gratings. 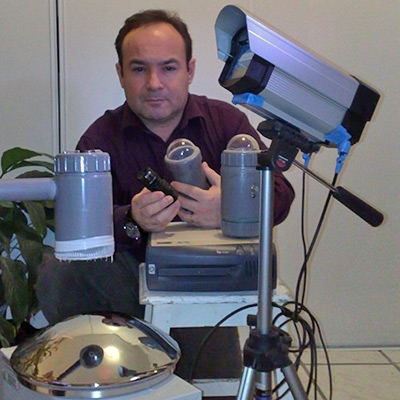 Jean-Christophe Doré demonstrating automatic detection stations of his own making

Until now, diffraction gratings have been tested with various light sources like sodium streetlights. JC then had the idea to perform some tests with light sources placed higher above to mimic more realistic conditions.

To do so, he imagined the following simple installation : a compact fluorescent lamp (CFL) tied to helium balloons. Balloons altitude can be set with a single cable – at a distance of approximately 30 meters (~100 feet). Thanks to a pulley the height of the light source installed in a pod can be controlled :

This is the lamp spectrum taken from a short distance :

Spectrum of the OSRAM Dulux Pocket flashlight from a short distance

Real life tests were realized by night on an airfield between 7:00 PM and 10:00 PM, an external temperature of -3 °C (26.5 °F) and a moderate NW wind.
After one hour for the set up and few preliminary tests, spectrums acquisition went well as well as one hour of video recording.

Here under several spectrums of the light source positionned about 30 meters above the ground :

And excerpts from videos captured with the camcorder and the detection station :

For comparison, these are reference pictures of a sodium streetlight captured with the camcorder and the detection station :

At last, these are the videos (reduced and compressed for Internet use) captured with the camcorder and the detection station :

The spectrum is afterward analyzed with data processing tools. Spectral lines analysis with dedicated software of the presented pictures here under clearly confirms mercury as the main chemical element of the plasma created in the neon lamp.

This spectrum capture method would at last allow knowing the chemical composition of light effects usually surrounding UFO phenomena. For example, is it ionized air? Is it plasma composed of elements that cannot be usually found in the atmosphere (cesium, sodium)? Does the light source have an electromagnetic field? If yes, are spectral lines polarized and split in several subcomponents (Zeeman effect)? Similarly, the presence of an electrical field is detectable thanks to lines shift and split (Stark effect). With a suitable CCD cell infrared and ultraviolet wavelengths could be detected as well etc…

Such pieces of evidence would strongly strengthen the vehicular thesis and imply other types of “advanced” propulsion technologies – different from classical jet or space rocket engines (for example, MHD based engines or even more exotic solutions).

In parallel, shots obtained through a diffraction grating easily avoid being fooled by a simple flame (continuous spectrum) – confirming the presence in the sky of simple “Thai lanterns” or alike often mistaken for nonstandard vehicles.

In parallel to this test :

In 2009, on Friday March 6th, during a 2 hours lecture given to an Astronomy Club, JC Doré exposed available means and methods to set up a night sky automatic surveillance system. About 15 to 17 persons were attending. After a short introduction to meteors passage detection and recording systems, JC Doré described how to operate (detection and record) associated video camera recorders (difference between B&W and color, CMOS & CCD…). Then he demonstrated the whole system by detecting a laser spot quickly moving. Some videos automatically acquired during fall 2008 (planes and meteors) were also played. Later on, it was the turn to diffraction gratings to be explained and for what kind of usage. At last, spectroscopy and wavelengths determination were discussed. The specific problem of determining UFOs plasma chemical components by spectroscopic analysis was not directly raised; however the usefulness of such shots in case of “strange” observations retained the attention of half of the public at least with a clearly more confirmed interest for 5 to 7 persons.