The UFO phenomenon has become part of the news for many decades.

Meanwhile, our planet entered a crucial phase of its history like nobody has known before, when mankind obtained technical means allowing to seriously deteriorate its environment, and beyond, to destroy any life on Earth.

Among most visible signs, global warming is obvious. 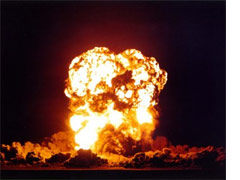 The terrestrial technico-scientist activity creates a lot of technological repercussions, often military ones, from the development of weapons of mass destruction to the manipulation of large groups of human beings.

While our technology sees a spectacular progress, our fundamental knowledge tramples more and more. Note the sterility of theoretical physics through the superstring theory for example.

In our opinion, this is the consequence of immutable dogmatic prejudices, a refusal of any really innovative fundamental scientific idea, in particular any change in our comprehension of the universe which could make interstellar travel possible, therefore incursions of visitors coming from stellar systems located at several tens light-years from ours, or even more.

The systematic brake to engage a true research, focusing on a rational and scientific investigation of the UFO file, is also for us a cloistering of the thought, a “paradigmatic lock”.

WHAT OCCURED IN FRANCE ABOUT THE UFO PHENOMENON ?

During three decades, a French institution1 controlled the local investigations, and because of its official status, was opposed to any other investigator.

The so-called scientific “methodology” praised by the media produced, in thirty years, 1250 reports established by the Gendarmerie Nationale (a French police corp with a military status) representing the examination of 6000 witnesses. But our understanding of the phenomenon did not progress with these reports.

We doubt these investigations make any move in the French scientific community, only thanks to the strength of their volume. The inquiry will not progress with an accumulation of new testimonies.

UFO organizations, without scientific means nor competences, did not produce concrete nor tangible scientific results either.

Consequently, it is urgent to make an organization able to conclude the real investigation of the UFO file, by implementing rational and scientific investigation methods, on the cutting edge of current techniques and knowledge. It would be useless to seek to establish such a research within institutional structures, those having shown their complete inefficiency for three decades.

In our mind, the study of the UFO phenomenon is a crucial and urgent step. Its accomplishment has been prevented for sixty years cause of a blocking at several levels: scientific (psycho-socio-immunological reaction), political (same mechanism, plus a “disinformation” component) and media (folklorized subject).

Thus a new structure arises, under the form of a non-profit organization called UFO-SCIENCE, in order to study in lab some aspects related to the UFO phenomenon, without prejudice about the origin of the phenomenon itself. We affirm the investigation of the UFO case is scientifically fertile for fundamental knowledge and technico-scientific applications.

This experimental research can finally exist without any aid nor control from administration… but with goodwill, impassioned people, students, high level engineers and researchers. UFO-SCIENCE will work with complete freedom and independence by implementing the principle enacted by late Aimé Michel4:

To think of everything and to believe nothing.

And taking into account the time already wasted through official ways, we associate the following motto:

The possibility of visits from extraterrestrial ethnos groups, even contacts, strongly raises the problem of mankind’s place in the universe, of its function, its origins and its destiny.

Inquiry of the UFO case touches with many fields, scientists of course, but also historical, political, military, ecological and religious.

We will concentrate our efforts in priority on experiments made with scientific rationality in mind, without uncertainty, implementing tested techniques.

This “laboratory of fortune” will be open to scientists, to journalists… to everyone. The equipment (decayed) and the quality of the research (cutting edge) will be openly exposed. You will foresee the level of French research in the field of magnetohydrodynamics5 and related science, with incredible working conditions if you take into account the competences gathered in this laboratory.

In a similar way, all experimental results will be displayed online, with popularized detailed reports, drawings, 3D diagrams, photographs, computer-generated animations, videos… in the Research section. All kinds of documents will also be available on the Downloads page.

1 In 1977 the GEPAN (French unidentified aerospace phenomenon research group) is created. Official service depending on CNES (French government space agency) under joint supervision of French Departments of Defense and Research, it had a steering committee and a scientific council which regularly published technical notes until 1983. This special department had been created after a report about the UFO phenomenon from the IHEDN (French institute of higher national defence studies) June 20, 1977. The report confirms a “UFO problem” indeed exists, states the ETH (the extraterrestrial hypothesis) “should not be regarded as ridiculous anymore” and recommends “the serious study of the phenomenon” because the “scientific and technical repercussions could prove to be important”.

In 1988 the SEPRA (atmospheric reentry phenomena research service) succeeds the GEPAN, this time without any scientific council. It is again replaced in 2005 by the GEIPAN (the “I” is there for Information) with an aim to make public some official reports about UFOs on its web site.

2 Michel Bounias : French scientist, researcher at the INRA (French agronomic public research institute) deceased March 23, 2003. Dr Bounias is the author of the unique available study treating of biochemical changes caused in plants by a short encounter with an unidentified flying object (the “Trans-en-Provence case”, 1981). You can read in French a small biography of Dr Michel Bounias on RR0 site.

3 Jean-Pierre Petit : French scientist, researcher at the CNRS (National Center for Scientific Research) now retired. Astrophysicist and plasma physicist, fluid dynamics and magnetohydrodynamics (MHD) specialist, Dr Petit worked on a MHD propulsor concept allowing supersonic flight without shock wave, breaking sound and heat barriers in silence. You can read here a list of his papers related to MHD, an autobiography on his web site www.jp-petit.org, and a very short page on wikipedia.

4 Aimé Michel (1919-1992) : French professor and investigator, graduate in psychology, licentiate in philosophy, sound engineer at the RDF (French Radio Broadcasting), expert in methodology, scientific writer. He is known in the UFO world mainly for its analysis of the 1954 French UFO wave.

5 Magnetohydrodynamics (MHD) also known as magnetofluiddynamics or hydromagnetics: Branch of physics studying influence of electromagnetic fields on electrically conducting fluids (gas or liquid). The word “magnetohydrodynamics” is derived from “magneto” meaning magnetic field, “hydro” meaning liquid, and “dynamics” meaning movement. In industry, magnetohydrodynamics is used as “MHD converters” of two kinds: either they generate electricity (MHD generator) or they propel a vehicle (MHD propulsor). In both cases, strong electromagnetic forces (Lorentz forces) act on the surrounding fluid, without any moving part. MHD works in salt water and also in ionized gas (plasma) where it is then of two types: the well-known MHD with “high magnetic Reynolds number” (thermonuclear and astrophysical plasmas) or the less known MHD with “low magnetic Reynolds number” (cold plasmas, evil controlled in the presence of electromagnetic fields). This last and most difficult MHD is the one studied in intra-atmospheric propulsion devices, where it is also sometimes called magnetoaerodynamics (MAD). Thus it is a science dealing at the same time with fluid mechanics, electromagnetism and plasma physics.